Placing a banknote under ultraviolet light may reveal some interesting security features. To illustrate this, we have chosen four banknotes from different countries. 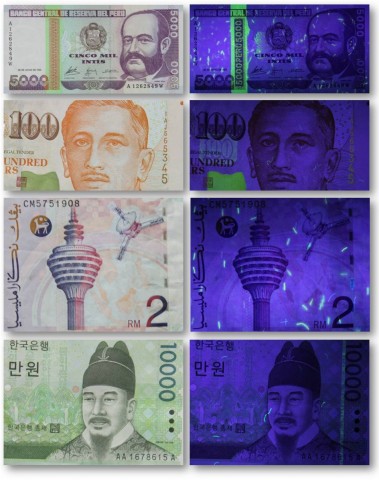 The most commonly used feature is random flecks which glow brightly under ultraviolet light. These flecks cannot be seen under ordinary light and are often incorporated on both sides of the note. In order to provide a greater contrast, such notes are often printed on security paper which does not reflect ultraviolet light. For example, the 5000 Intis (1988) note from Peru and the 2 Ringgit (1996) note from Malaysia are sprinkled generously with fluorescent green and blue flecks.

Fluorescent security features can be also incorporated with other features on the banknote. On the 100 Dollar (2009) note from Singapore, the latent image bearing the MAS logo fluoresces under ultraviolet light. However, this wavy-shaped feature was not adopted by the polymer banknotes to make way for the island-shaped security thread. A security thread on the right-hand edge of the 10000 Won (2007) note from Korea gives a slight glow when placed under ultraviolet light.

Fluorescent pigment can also be used to print detailed graphics on the banknotes. The denomination is printed vertically across the 5000 Intis note, while numerals are printed in the middle of the Singapore $100 note. For example, putting a £20 (2007) note under ultraviolet light reveals a bright red and green figure 20. The serial numbers and seal on Singapore banknotes are printed with fluorescent ink.

Sometimes, these fluorescent features can be seen without using an ultraviolet lamp. For example, the numerals in the middle of Singapore’s Portrait Series of banknotes are large enough to be seen using by holding it next to the window, by means of ultraviolet rays from sunlight.

Today, many countries make use of such security features to deter counterfeiting, given that it is less easy to reproduce these features using commercially available printers. Often, these features are found on most denominations of modern banknotes. Even the 100 Trillion Dollar (2009) note from Zimbabwe has slight traces of fluorescent fibres embedded on it. Fluorescent features are found on Bank of England’s £5, £10 and £20 notes, and they are likely to be used on the Series F £50 note, to be released in late 2011.

If you wish to explore the fluorescent features of banknotes, invest in an ultraviolet lamp. This lamp should ideally emit light at 365 nanometres, which is often termed ‘black light’. For a cheaper alternative, visit a novelty store and find pens which allow one to write invisible messages which are revealed under ‘magic’ light. Here, you can purchase one at Daiso for $2.

interesting article on uv features! did not know that there were so many hidden features…