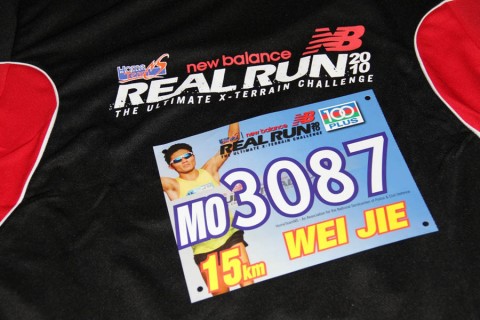 The first four kilometres of trail was quite comfortable, as the weather was neither too hot nor too cold. Up next is a straight stretch of road down Aviation Park Road, followed by a left turn to the Coastal Park Connector. Making an about turn 8.4 kilometres into the run, we headed towards the Changi Beach Park. At the 10-kilometre mark, the time elapsed was still safely under 50 minutes. The indicators for the 10-kilometre and 11-kilometre marks seemed to be placed more than a kilometre apart. Up next was the 600 metres of sand while running along the beach. As we were running parallel to a 15 degree slope, it was not easy to maintain balance. This year, the sand was rather soft compared to last time.

Lastly, my timing for the 10-kilometre Mizuno Wave Run last Sunday was 0:54:48 due to a slow start. Overtaking was almost impossible on the five-foot walkway that lasted the first three kilometres.

Kent Ridge Park, a 47-hectare public park located along the south-western coast of Singapore, has been featured on a recent stamp issue. Singapore Post has released this set of four se-tenant stamps on 22 September 2010 which features the World War II historical site.

Kent Ridge Park was then known as Pasir Panjang Ridge. In 1942, the place was used by the British to defend Singapore against the Japanese. One of the hills in the park, Bukit Chandu, was the site for the Battle for Pasir Panjang, one of the last battles bitterly fought by the Malay Regiment against the Japanese during the war. Today, a colonial bungalow stands at 31K Bukit Chandu. It was converted to the Reflections at Bukit Chandu museum after restoration works to commemorate the patriots.