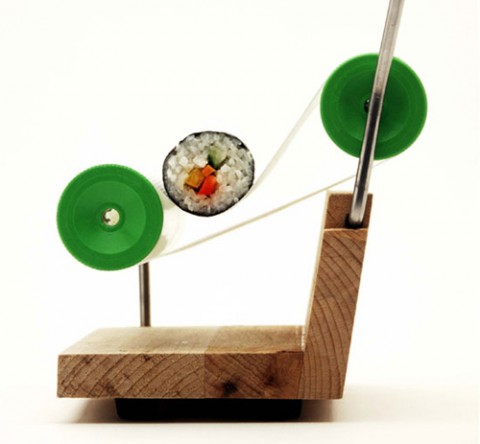 Machines are really getting more and more creative today. Even simple machines such as a sushi roller can be created! Apart from the traditional style of rolling sushi with the bamboo mat, this machine can produce the same tasty sushi. Simply load with short-grain Japanese rice (or any other types of rice that is available), add some ingredients such as cucumber or tuna, then adding more rice, pull the level like a jackpot machine, then finally winding a piece of seaweed in. Release the lever and in front of you is a perfectly round sushi roll.

This masterpiece was designed by Osko+Deichmann from Germany, and will be on showcase at the Kitchen Ecology Exhibition in Los Angeles coming June. Perhaps, with this simple yet innovative machine, many of us can prepare sushi at a faster rate than using a bamboo mat, but it is not necessarily the case for shops selling sushi. Currently, The Restaurant does not have any plans to get such a machine as of yet!

Stretching 3.6 km from end to end, the MCE runs through reclaimed land. It also consists of more than 0.4 km of tunnel running directly under the seabed of Marina Bay. The MCE is scheduled to be completed by the end of 2013, not long after the opening of the Integrated Resort. These developments in architectural techniques have allowed Singapore to make full use of her limited land space.

Since 1 October 2008, the Public Transport Council has introduced changes to the system of calculating fares for public transport such as buses and trains. Also known as ‘distance-based throughfares’, the fares will be calculated based on the distance travelled. Commuters can then choose the route which allows them to reach their destination with flexibility, based on shortest travelling time, or minimum walking distance. Also, the transfer rebates have increased. Soon, in the coming months, this will be in full effect, where the fare for the transfer journey would be comparable to that of a direct journey.

Well, it appears to me that the ‘better and fairer’ fare system does not benefit students much. Even though I have to agree that 44 cents per trip is really subsidised, down from 45 cents before 1 April this year, it would be great if the price would be the same up to 3 transfers. I have realised that some students would rather walk a longer distance just to save the additional 34 cents of transfer. Even though the 34 cents seems small, it would cost more than $100 per year! If the price was increased to 60 cents per trip, similar to the new system of calculating fares for adults, those who require transfer journeys would be able to benefit.

Since they are able to give adults a ‘better and fairer’ public transport fare system, why not allow students to enjoy a similar version as well? After all, the aim is to encourage commuters to have flexibility in deciding the best route to take to reach their destination.

Earth Day falls on 22 April every year, with its aim to promote care for the environment and towards our delicate nature. For the 39th time, Earth Day is celebrated by countries from around the world, through different creative methods. For example, several pro-environmental organisations in Singapore are promoting the 3Rs: Reduce, Reuse and Recycle. Also, many student groups have been found generating and executing innovative ideas to convert such waste materials into more useful products. In support of this special day of the year, The Restaurant has switched off the air conditioning system in its outlets for today, in order to cut down carbon emissions.

Recently, a new compressed natural gas (CNG) refilling station has appeared not far away from The Restaurant. CNG is a better alternative of fuel as compared to diesel or petrol. In addition, this is safer as than other types of fuels if spillages occur, since it contains of mainly methane. In fact, CNG will diffuse very quickly since it is less dense than air. As I travel pass the CNG refilling station almost every day, many vehicles, mostly taxis with the green diamond-shaped CNG label are spotted. One drawback is that it requires a cylinder to be installed in the car and maintained at a pressure of 3000 psi, adding some extra weight and taking up quite a large space in the vehicle.

If you would like to send us a letter, please drop us a message for our mailing address.