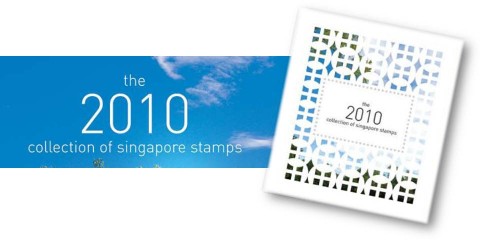 The 2010 Collection of Singapore Stamps is an annual stamp collection produced by Singapore Post in a coffee-table book style. This book contains all the stamp issues released over the year. It contains a total of 62 stamps and one miniature sheet, with a total face value of S$39.21. Of course, a list of technical details and an interesting write-up accompany each of the stamp issues.

Highlights include, the Singapore 2010 Youth Olympic Games, a new series on National Monuments, the anniversaries of four organisations and the Kent Ridge Park Trail.

Purchases made before 31 December 2010 are at a special price of S$51.90. It would be increased to S$55 thereafter. Subject to stock, a year 2011 calendar will be given with every book purchased. Do read about last year’s annual collection 2009 too!

Year 2010 is coming to an end. We would like to wish all readers a pleasantly Merry Christmas and all the best in the New Year ahead.

I have completed the Standard Chartered Marathon Singapore 2010 held this morning, with a net time of 4:21:55. This is my second full marathon, with the previous being the Adidas Sundown Marathon 2009. 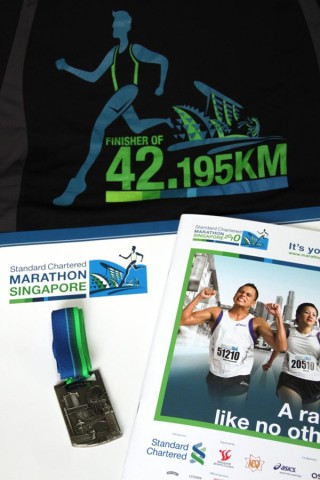 To give an overview of the full marathon route, I would divide it into four sections.

Starting in front of Wisma Atria, we ran down Orchard Road and Penang Road, then into Fort Canning Tunnel. This first stretch was rather comfortable as not much overtaking was required. The runners were grouped into pens, based on their estimated completion time. Next, we headed south towards Maxwell Food Court via New Bridge Road, which was the four-kilometre mark. We proceeded to cross the Esplanade Bridge, towards the Marina Bay Floating Platform, the Singapore Flyer and the F1 Pit Building. The eight-kilometre mark was at the end of the F1 Pit Building. This was followed by a straight run down Republic Avenue, Nicoll Highway, Mountbatten Road and Fort Road. For this 12-kilometre stretch, there were as many as five water points.

The next section is a run through East Coast Park, one of the favourite places where local races are held. This was a long 18-kilometre stretch nevertheless. When I entered, the sky was still dark, but when I left, the sun was already up in the sky. After a left turn into East Coast Park, we ran past Amber Beacon, Playground @ Big Splash, East Coast Lagoon and Bedok Jetty. Due to the width of the cycling and running tracks, there was little overcrowding. The turning point was somewhere in Area G. Just to add, I almost collided with a big dog which abruptly changed its course of movement.

For the next stretch, we ran alongside the construction site for the Marina Coastal Expressway. As this area was less shady due to the lack of trees, together with the possible effect of aches and cramps, many runners around me were brisk-walking, or simply walking. We ran past the Marina Bay Golf Course. One of the highlight of the marathon route was running across the Marina Barrage, which was rather scenic. We then proceeded towards Marina Mall, which gave a slight reprieve of the scorching heat from the sun.

The last stretch was probably one of the most challenging parts of the full marathon route. First, runners from the 10-kilometre category merged into one lane, where many of them were walking, talking on their mobile phones, eating sandwich, chatting with the person next to them and forming a barricade, blocking the way. After a right turn, we made a slight ascent up the Benjamin Sheares Bridge, where the two leftmost lanes were cordoned off. To make things worse, runners from the half marathon category joined the human jam just before the 38-kilometre mark. Honestly, it was rather difficult, or near impossible, to overtake. One suggestion would be to separate the three different categories, or at the least have race marshals directing those who are not running to both sides. It was similar for the last few kilometres, but things changed for the better after a left turn at the Esplanade. We continued to run towards The Fullerton Hotel Singapore and across Anderson Bridge. The final sprint was alongside the Padang, similar to the Safra Singapore Bay Run & Army Half Marathon. 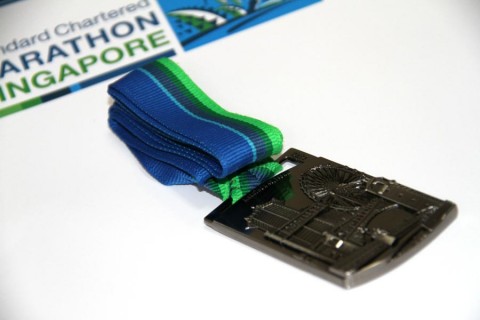 On the whole, the marathon was well-planned. Of course, the congestion problem for the last four kilometres can be improved. Just a side note, the distance markers seemed to be quite different from that as indicated on the map. For example, the 21-kilometre mark was after the turning point on the map, but before the turning point in reality. Also, it reads 34 kilometres on the map while a 35 kilometre sign stands at the end of Marina Barrage.

Next year, I will be participating in the Sundown Marathon 2011 full marathon and 100-kilometre Sundown Ultramarathon 2011. 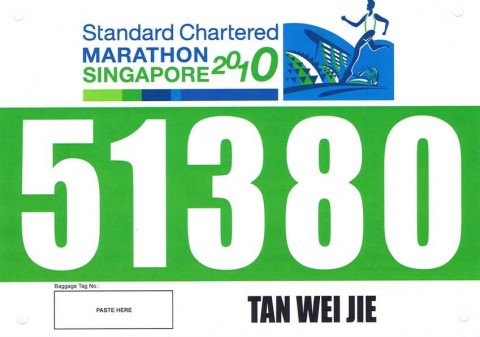