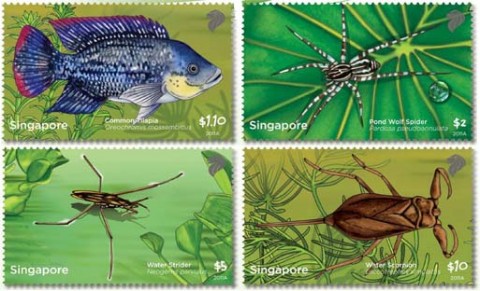 On 16 February 2011, a set of high-value definitive stamps were released. This set of stamps features the detailed and vivid images of four pond creatures, which is said to ‘give a glimpse beneath the water’s surface of life on a pond’. They include the common tilapia ($1.10), pond wolf spider ($2), water skaters ($5) and water scorpion ($10).

Common Tilapia (Oreochromis mossambicus) is one of the most common Cichlid fish in Singapore. Originally from East Africa, this Cichlid has been introduced to Singapore as a food source by the Japanese during the World War II. Hence, it is better known as “Japanese” fish.

Pond Wolf Spider (Pardosa pseudoannulata) is an agile predator and has good eyesight. This spider belongs to the family Lycosidae. It leads a solitary life and hunts alone. Female wolf spiders can be recognised easily as they move around with a spherical egg-sac attached to their spinnerets.

Water Strider (Neogerris parvulus) is a semi aquatic insect within the Order Hemiptera in the family Gerridae. It lives on the surface of ponds, slow streams, marshes, and other quiet waters. It preys on insects and other small invertebrates on top of or directly below surface using its strong forelegs that end with claws.

Water Scorpion (Laccotrephes simulatus) is an aquatic insect belonging to the family Nepidae. It is an ambush predator. When prey approaches, it will lunge forward and grab it with its powerful forelimbs. It feeds primarily on invertebrates, but occasionally preys on small fish or tadpoles.

A complete set of stamps has a face value of $18.10. The low-value definitive stamps would be released on 13 April 2011. 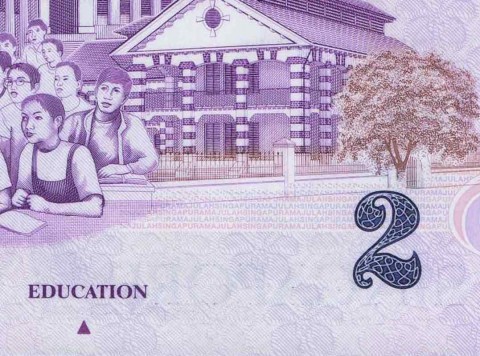 In late January this year, banks started issuing a new variety of the $2 Singapore banknote. This polymer note from the Portrait series comes with a triangle on the reverse was seen just two months after the $10 note with one triangle on the reverse surfaced. Now, there are a total of four varieties for the $2 note – with no symbol, one square, two squares and one triangle.

The first prefix for this variety would be 4AA and has a signature of MAS Chairman SM Goh Chok Tong on the obverse.