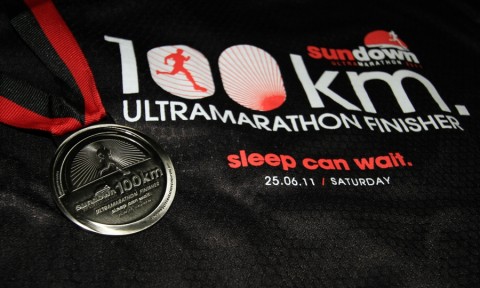 This morning, I completed the 2011 Sundown Ultramarathon. Spanning a total of 100 kilometres, the entire journey took me a net duration of 16:39:58. It was definitely challenging both physically and mentally. Starting from Marina Barrage, runners were brought through East Coast Park, Changi Village, Pasir Ris Park and Bedok Reservoir Park, then back to Marina Barrage via the same route. In fact, this was the first time I preferred an out and back route, as I could expect what to go through for the second half. 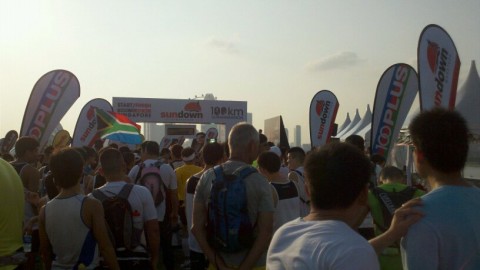 The race was flagged off at 6 pm on 25 June atop the Marina Barrage building, where I followed Alvin on his 4-minute run 1-minute walk strategy. After crossing the Barrage, we ran past the Indoor Stadium and towards East Coast Park, crossing an overhead bridge along the way. After 7.5 kilometres, we emerged from an underpass and started the East Coast Park leg. The East Coast Park stretch was some 11 kilometres long. Soon, massive dark clouds started appearing, signifying the threat of a downpour. Nearing the 20-kilometre pit stop (which was located just after the 19-kilometre mark), it started to drizzle. Luckily, the drizzle did not transmogrify itself into a thunderstorm.

The next 6 kilometres was a straight along Changi Coastal Road, and we soon arrived at the 30-kilometre pit stop (located at the 29-kilometre mark) just across the bridge from Changi Village. The next stretch was similar to the 2009 Sundown Marathon route, bringing runners up a hill and towards Loyang estate. However, I could not keep up with Alvin’s pace just before the 32-kilometre marker and continued running at a slower pace. By 36 kilometres, I had to walk in the middle of Pasir Ris Park due to a slight strain on the knee. By then, the time elapsed was 4:47. In order to have enough time to complete the ultramarathon, I had to reach the halfway mark by 7:30. The 40-kilometre pit stop was located just before entering the housing estate. There was another overhead bridge at Ikea Tampines which brought us across the expressway. We ran down a relatively straight stretch of Tampines Avenue 10 and entered Bedok Reservoir Park. With just three more kilometres to go, I gave myself 11 minutes per kilometre to reach the pit stop.

At the pit stop, I collected my Special Needs Bag and changed into a fresh set of running attire. I also managed to do some stretching and grab half a hot dog bun. After spending close to 28 minutes at the pit stop, I deposited my bag and embarked on the next half of the journey. As my legs started to hurt, I decided to walk. A few minutes later, Kelly appeared and encouraged me not to give up. By taking small steps, I was able to run for short distances and complete each kilometre in 9.5 minutes. At 72 kilometres, I decided to walk for the rest of the journey due to the strain on my knee. Indeed, I felt a sense of loneliness as the Changi Coastal Road stretch. However, volunteers cheered on as they rode their bicycles up and down the course. By the 80-kilometre mark, it was already past 7 am.

Upon entering East Coast Park, I could feel the heat from the sun. It was indeed a long and tiring stretch, and I aimed to leave the place by 9.30 am by walking at 11 minutes per kilometre. I had to consume lots of water in order to keep myself hydrated. For the last 7.5 kilometres, there was an underpass and an overhead bridge to conquer. Although my knees started to ache further, I increased my pace slightly and managed to overtake a few people. At the 98-kilometre mark, Marina Barrage was in sight. While it appeared near, it took me 18:36 to reach the end point. 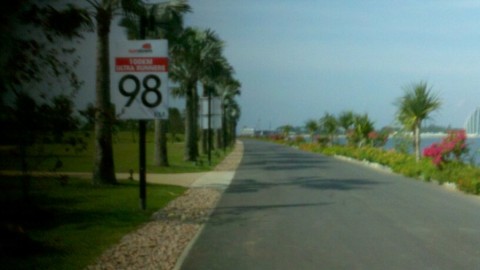 After crossing the barrage, we had to run up the slope before crossing the finish line, where we were presented with a finisher T-shirt, medal and towel. Also, runners were given a bottle of mineral water and isotonic drink. 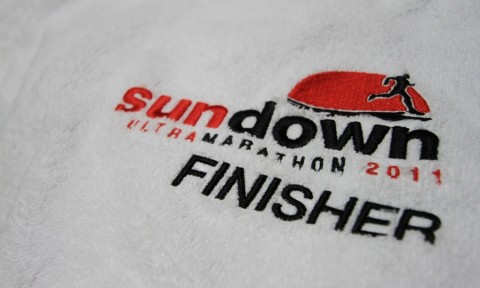 Throughout the entire route, supporters were constantly cheering. For the 100-kilometre ultramarathon, runners were encouraged to bring their own source of hydration as pit stops were located at every 10 kilometre or so. At each pit stop, I refilled my water bottle with mineral water and grabbed some food such as muffins, cookies and raisins. And I was glad I chose a 1-litre bottle instead of a 600 ml bottle, given that the last 20-kilometre stretch was somewhat hot.

Many thanks to Alvin and Kelly for pacing me, as well as to friends who gave words of encouragement during the run!