Over the week, the (physical) mailbox at The Restaurant was clogged up by an ever-increasing number of mail items received from different places around the globe, such as Finland, Germany, Italy, Taiwan, Thailand and the United Kingdom, and mainly consisted of postcards (via the Postcrossing Project). In order to prevent further clogging (especially by advertisements which force their way in every now and then), clearing of litters letters are now carried out on a daily basis.

Amidst the haystack of assorted postcards which arrive in my mailbox every day, there were, at times, one or two postcards from Singapore.

This postcard was printed on a 4 inch by 6 inch plain index card on both sides. It was dropped into the postbox on Monday, 20 July 2009, at 1600 hours, and should have arrived at its destination on Tuesday. I waited for a few days, thinking of possible reasons for the non-arrival of the postcard. It could have been eaten up by the machines, either because the cardstock is too thin, or that it had exceeded the maximum allowed postcard length of 148 mm by 4 mm, of which both would be considered non-standard mail.

Surprisingly, the postcard arrived in the mailbox, in the afternoon of Friday, 24 July 2009. More surprisingly, there was no cancellation on the stamp. Even more surprisingly, the postmark dated 23 July was on the reverse side (which featured abstract art which does not resemble a stamp in any way), indicating that the postcard was processed and cleared at the Singapore Post Centre on 23 July (and not on 20 July). I have no clue as to how this unique cancellation originated. Also, the three day delay remains a mystery. 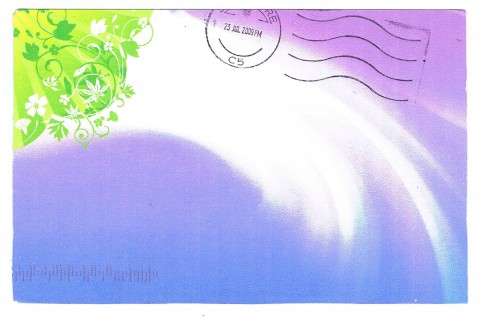 Unconvinced that index cards cannot be used as postcards, I sent another two postcards on Monday, 27 July 2009. The design used this time was much simpler than the previous one. Both postcards were identical, right down to the postage stamp. The next day, these two postcards swiftly arrived in my mailbox without any delay. Spot the difference! 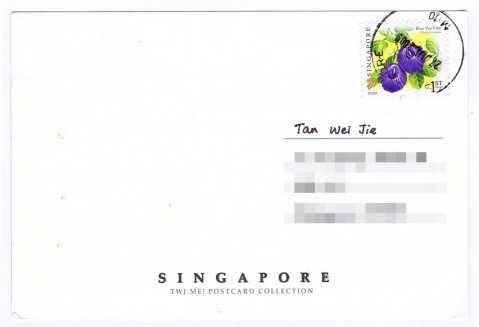 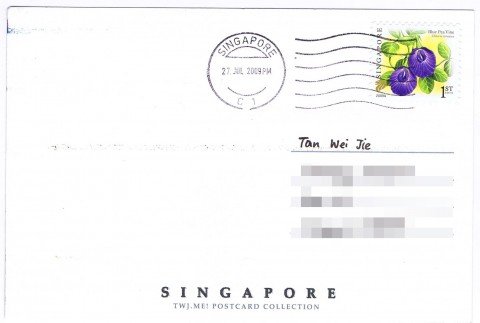 One of the postcards could not be cancelled automatically by the machine but had to be cancelled by hand. The other postcard, however, was successful in getting a machine cancellation.

Postcards from Singapore are strangely interesting!