Two years ago on 16 January 2009, the Reserve Bank of Zimbabwe announced the printing of the 100 trillion dollar banknote. At the time of announcement, this banknote was worth 300 US dollars, which meant that it would cost 300 billion Zimbabwe dollars for a loaf of bread. 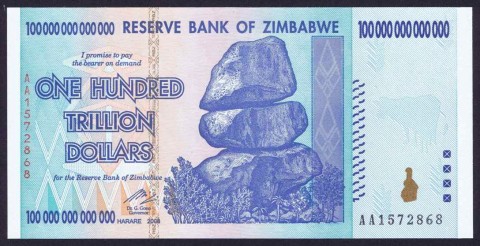 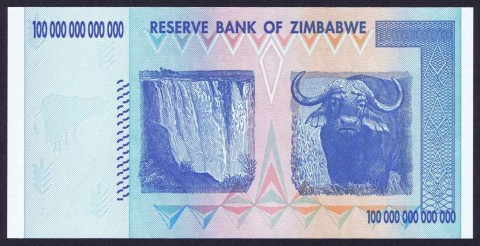 Due to the effect of hyperinflation in the country, the Reserve Bank of Zimbabwe had to print money in increasingly higher denominations. This was one of the worst hyperinflations in history, where prices doubled every 24.7 hours in the month of November 2008. The annual inflation was estimated at 6.5 x 10108 per cent as of December 2008. In order to regain confidence in the economy, the South African rand and the US dollar became the main currencies used for trade from April 2009.

Earlier this year, a news article by the Associated Press (AP) claimed that an increasing number of visitors to Zimbabwe bought these banknotes from street vendors. Although this banknote was not the largest denomination in history, it is certainly worth keeping one, as a souvenir. After the First World War, the Weimar Republic of Germany issued a 100 trillion Mark note. In 1946, the Hungarian National Bank introduced the 100 quintillion (1020) Pengo banknote into circulation, but the twenty zeroes were not printed out. In fact, a sextillion (1021) dollar note was printed but never issued.

In countries prone to hyperinflation, metallic coins are seldom minted. As the prices increase rapidly, these coins were commonly melted down for export due to its diminished face value. In fact, the Zimbabwean banknotes were gradually printed on paper of a lower quality as more zeroes were added.

On another note, three local banks in Singapore are rolling out new and crisp banknotes for the Chinese New Year from today onwards. They are OCBC, DBS and POSB. On Tuesday, new bundles of notes are available at OCBC, HSBC, Citibank and Standard Chartered Bank. Maybank will allow customers to exchange for new banknotes on Friday.