This morning marks the completion of my third full marathon, with a net timing of 4 hours 52 minutes. This time, the organisers decided to bring forward the starting time by two hours to 10 pm, making it inconvenient for participants to leave the event venue after the race. Getting to the event site at Changi Exhibition Centre took quite some time, as the traffic congestion started building up all the way to Changi Village. Earlier editions of the Sundown marathon started at Changi Village instead. 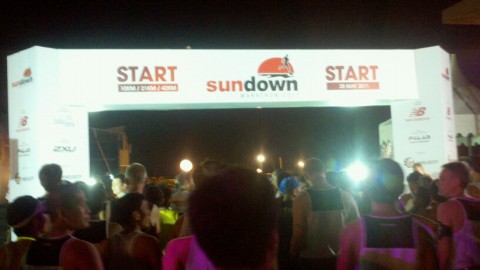 Before the flag off, participants were dazzled by colourful strobe lights at the starting point. However, I would probably end up dizzy if these flashes continued! The race started in front of Changi Exhibition Centre, and brought participants through a relatively flat Changi Coastal Road and East Coast Park. Other than the first and last three kilometres, the scenery mainly comprised trees and cyclists. This made the route somewhat boring, especially in comparison with Sundown Marathon 2009 – which included urban and physical obstacles such as overhead bridges in the second half and undulating terrain near the end.

The weather was somewhat warm and humid, which can be felt along Changi Coastal Road. Water points were conveniently located every two kilometres apart, with signs reading ‘Hydration Station Ahead’ placed some 200 metres before the station. This time, participants may miss the energy gel station as it was located in a dark zone after a bend without any sponsor banners. Towards the end of the route, some volunteers (who reported to the site as early as 4 pm) were already sitting down or lying flat on the ground to catch some rest after standing for more than ten hours. However, as the starting times for the different categories were staggered, there was no congestion encountered.

This year, the race pack – coupled with the increase in race fees – made the entire event rather disappointing. It also made it seemingly and excessively profit-orientated. Other than a running singlet, the drawing block-sized bag was filled with promotional leaflets. On the website, it states that ’42KM Marathon Participants will receive a race kit bag containing an exclusive New Balance Event Singlet and other goodies.’ It seems that other goodies refer to the pieces of paper. Clearly, the organiser was cutting costs in order to maximise their profits as far as possible. Compared to the Standard Chartered Marathon series, the quality of the Sundown Marathon could be improved upon.