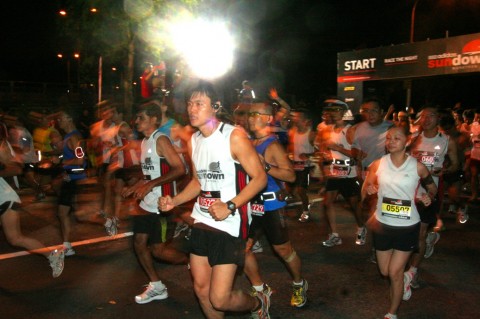 Running at night is quite different from running in the day. It is much quieter at night, and at some instances, it may be quite boring, as everything is shrouded in darkness. Also, it is much cooler at night, especially when running along the coastline (String of Lights) and enjoying the land breeze. 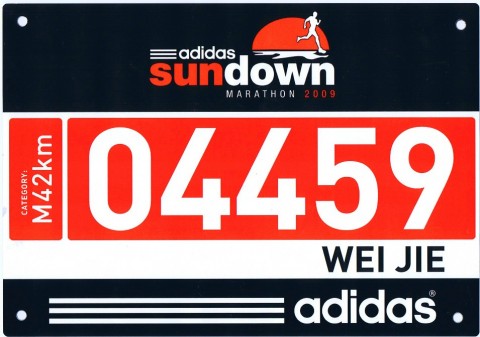 The route was divided into four sections:

This is the longest stretch of the entire route at 21 kilometres. Seemingly identical white lamps formed a never-ending line. Starting from Nicoll Drive, I started running at a comfortable pace, so that I would not be drained out for the entire route. The next stretch was a straight route, and the only attraction was watching a few planes land at Changi International Airport. The air was very humid, and we had to compete with the plants for oxygen. After running south for an hour or so, there was a turn towards East Coast Park. Part of the route was the same for the Saucony-100Plus Passion Run last Sunday, and at night, it is just a different view. Lights from boats out at sea formed a static pattern. However, it is really interesting to find that East Coast Park is also full of life at night. There were groups of people cycling, camping, playing card games and barbequing. Water was made available at regular 2- to 3-kilometre intervals. This part of the route ended after crossing an overhead bridge across the East Coast Parkway.

This route had three overhead bridges to scale. Running along the Park Connector next to the drain, we saw landmarks such as Kembangan MRT Station. At the 26-kilometre mark, my right leg started to ache, so I decided to take a short rest on the bench. However, I soon realised that it was not a very good idea, as the muscles began contracting within seconds, resulting in unbearable cramps. The next two kilometres was along a jogging trail in a residential estate. Energy gels of different flavours were supplied there.

The first part of the trail required us to run on a sandy trail halfway around Bedok Reservoir. I had to stop twice along the way as the strain on my right ankle was getting worse. At the 30-kilometre mark, there was an aid station, with a supply of bananas. There was also Deep Heat cream to relieve the pain on the thighs. Realising that I should not stop moving my legs (otherwise there will be cramps), from that point on, I adopted a walk-run strategy, alternating between the two every 300 to 400 metres. My pace decreased to an average of 9 minutes per kilometre. There was also a suspension bridge which was oscillating while other runners zoomed past me.

The last 7 kilometres was a painful one. After spotting the 5:30 pacer, David, I decided to follow him to the endpoint. Running and walking along Loyang Avenue, I tried to follow David’s pacing. This section also included a 300 metre upward slope, which was not as bad as I had expected. After seeing Changi Village Hotel, I was convinced that I was very near the endpoint. I kept pushing myself, determined to clear the 5 hour 30 minute mark. After a short sprint towards Nicoll Drive, I made a U-turn to the Finish Point. Pacers do make a big difference! 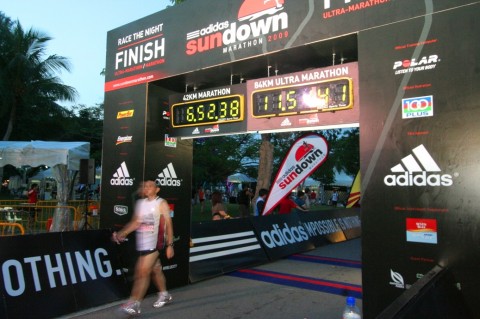 After collecting the finisher medal and T-shirt, David also advised me to walk around for a few minutes before sitting down. The design for the finisher T-shirt was very attractive! Also at the marathon was Dr Adrian Loo and we managed to talk to each other for a while.

Volunteers and other supporters cheered on along the way, and this had motivated me to continue running (and not walking so much). I have learnt that it is really important to keep a comfortable pace at the start so that there is sufficient energy to complete the entire marathon. A tip from the 5:00 pacer Sri, when the cramp about to take effect, do some quick stretching and continue running, otherwise it would be very hard to start running again. Also, the unlimited supply of water at the 21 aid stations was very thirst-quenching. 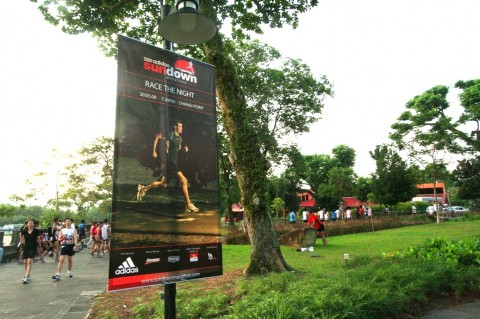