With two new MRT stations in the west of Singapore opening on the last day of February earlier this year, we have been speculating that TransitLink would be printing new System Maps to be distributed to commuters at the Passenger Service Centres who request for them, either because they are lost somewhere in the network of train stations or because they are collecting them. Since January this year, we have been collecting these System Maps from MRT stations all over the island, to note if there is any new System Map available.

Joo Koon and Pioneer MRT stations, which opened its doors to the public on 28 February, first appeared in the ‘new’ System Map as a sticker. As of our knowledge, it appears that this ‘sticker’ version of the System Map can only be obtained from the North-South Line Passenger Service Centre at Outram Park MRT station. It is not available from the North-East Line Passenger Service Centre as of 3 May. While stocks last!

Today, I have finally seen the new System Map, updated with the two new MRT stations in the west, as well as the five Circle Line MRT stations which will be opening in less than two weeks’ time. On 16 April 2009, it was announced on the media that the new line will commence operational service on 28 May, two days ahead of 30 May when first announced on 12 February. It would have been possible that this System Map was printed sometime between 12 February and 16 April, since it reflects the old date of commencement. Grab yours now at Ang Mo Kio MRT Station like I did. 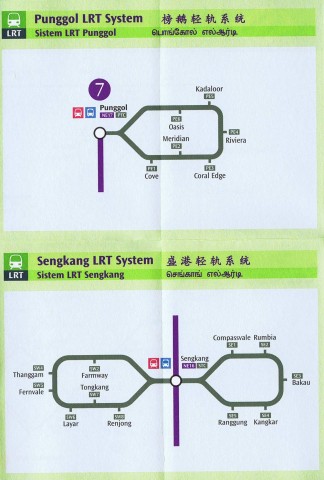 1 reply on “The New Integrated MRT and LRT System Map”

Hello I would like to have a copy of the new integrated Singapore mrt and lrt map.thanks