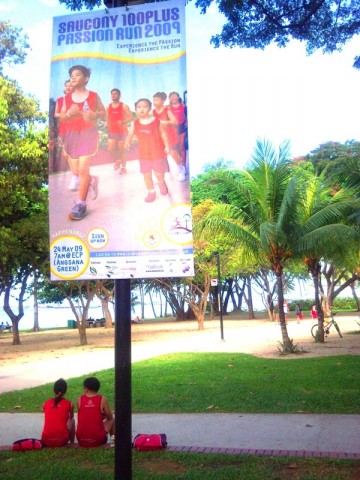 The Singapore Passion Run 2009 was held this morning at East Coast Park. This is the third time the event is hosted in Singapore. Realising that I had little time left for breakfast, I grabbed a powerbar and ate it on the way there. After I arrived, I followed other runners who were in red on a long walk towards the starting point which was over 1 km away. I was on the wave which started at 0735. This was my second 15 km run.

The first 3 km was covered at a comfortable pace, and the wind was blowing from behind me. After that, at 3.-something km, I saw a toilet and decided to use, and this had ate up a few minutes of my time, but that was better than running with a pain in the stomach for the rest of the journey. Up to the 7 km mark, I was running at a much slower pace as the sweltering heat became more intense. At the 5 km sign, the time on my phone was 0806, which meant that I had to speed up, as I have taken 31 minutes for the first third of the distance.

Next up, at 0826, is a junction where the 10 km and 15 km runners split up. From this point on, I ran at a constant pace all the way to the finish line without stopping, except for the thirst-quenching drinks, of course. The additional 5 km stretch of road had some undulating terrain, and I took close to 30 minutes on this stretch. The U-turn was estimated to be at the 10.3 km mark.

From the 12 km sign to the 13 km sign, the distance covered seemed way much shorter than a kilometre, probably 300 to 400 metres short. I took me some time see another mileage sign after the ’13 km’ sign. When the 10 km and 15 km runners merged back onto the same track, it was 0854. It took me around 14 minutes for the last more-than-2 km stretch, whilst spotting this sign around the probable 14 km mark at 0904, warning runners that the endpoint is still another 10.4 km (or 15 km) ahead.

The collection of goodie bags was seamlessly quick, compared to a ten minute queue at the inaugural Suburban Run on 15 March. My overall timing for this 15 km run was around 1 hour 33 minutes, approximately 9.67 km per hour, which was quite good, considering that had not been training as much recently.

For this run, I find that the volunteers there are really hyped up and they kept cheering everyone on, and pushed me ahead. Water points at this run were adequate, and had an unlimited supply of 100Plus and mineral water. At the end of the race, I gulped down two cans of 100Plus.