An International Reply Coupons, or IRC for short, is a coupon which is redeemable in all Universal Postal Union (UPU) member countries, for stamps which amount to the minimum postage required for a 20 gram letter anywhere in the world. They can be purchased from post offices in over 70 countries.

These coupons are sometimes sought after by collectors of stamps and postal history. They can either be saved as interesting collectible items since they are dated, or be used for mail correspondence or transactions between people in different countries.

The reason for which International Reply Coupons are issued is to allow the sender to pay for the cost of postage for the recipient to reply, as a form of nice gesture. If the recipient resides within the same country, the sender can simply send a self-addressed stamped envelope. However, if the addressee is living in another country, stamps from the sender’s country are not valid in the recipient’s country. It is also difficult to obtain stamps from that country.

To get around this, International Reply Coupons were introduced in 1906 at a Universal Postal Union congress in Rome. They can be purchased for a fixed amount in a country and be redeemed for stamps in another country. In Singapore, each IRC is priced at $2.50, and can be redeemed for $1.10 postage stamps. 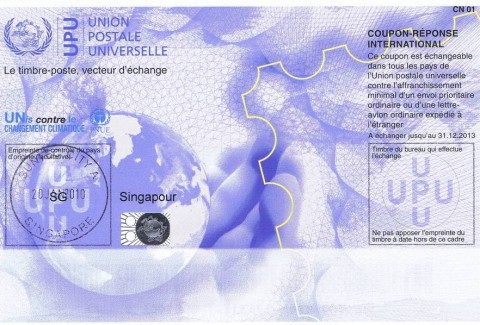 The new ‘Nairobi’ International Reply Coupons were issued from 1 July 2009 will be valid until 31 December 2013. However, these coupons were only obtainable in local post offices in early 2010. The obverse shows a globe and a yellow outline of a postage stamp.

On the reverse is a message printed in red, in six other languages: German, English, Arabic, Chinese, Spanish and Russian. It reads ‘This coupon is exchangeable in any country of the Universal Postal Union for the minimum postage for an unregistered priority item or an unregistered letter sent by air to a foreign country.’ 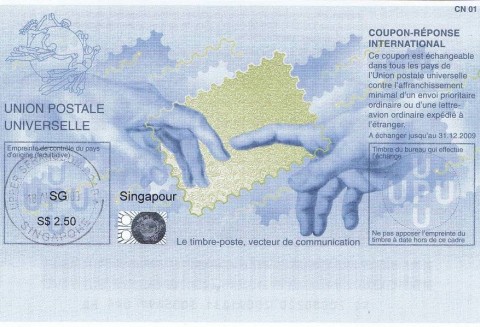 The previous IRC named ‘Beijing Model No. 2’ was issued from 2006 are valid until 31 December 2009. The obverse shows an illustration of two fingers about to touch, framed in a postage stamp, with text in French.

When the IRCs are in the hands of collectors, they bear a single postmark as shown. This postmark shows the location in which the coupon was issued. For the case of Singapore, it identifies the post office from which the IRC originated. When the coupon is redeemed in the post office of another country, the IRC will be retained by the post office. However, it is possible to find coupons with two postmarks that somehow made its way into collector hands.

When overseas, some collectors purchase IRCs as a unique souvenir to document the date and the location of the visit. I’ll take note of this when I next travel. These IRCs from Singapore have been added to my collection of postal material.